The originating and core expertise of ADC which served as its launch pad in 2005 is in delivering Engineering, Procurement and Construction (EPC) services to the District Cooling industry. As the real estate market grew in double-digit percentages year-on-year in the UAE in particular and the GCC in general, so did the district cooling sector during the 2004-2009 period. Such an industry which became the largest of its kind internationally required very proficient Contractors to deliver ever bigger plants.

ADC has been building and delivering successfully over a dozen such projects spanning from 5000 Tons plant expansion to 90,000 Ton plant, under Design & Build, Procure & Construct and mainly Engineer, Procure and Construct contracting schemes. In order to succeed in delivering those solutions in a cost effective and timely manner as well as in bringing added value in terms of value engineering and advanced solution, ADC had to assemble an impressive team of design engineers, procurement and administrative staff, but also a solid group of construction specialists ADC’s Quality Management System and newly implemented Enterprise Resource Planning help the various teams’ communication and exchanges flow smoothly and accurately.

In addition, ADC’s valued supply chain in terms of vendors, specialists, and service providers has been developed over the years to ensure proper alignment and common and integrated actions. From a regional perspective, such in-house expertise is usually bolstered by key strategic partnerships with local leading general or civil/infrastructure contractors that bring their local knowledge, qualifications, and market knowledge in order to deliver successful and competitive bids.

Besides the District & Central Cooling Plants, the tendency has been to develop smaller scale plants whose commercial sustenance resides in modularity for future expansions, cost-competitiveness and fast deployment. ADC had to adapt to that market requirement and has been designing and delivering Modular Packaged Cooling units to those clients. Furthermore, ADC and its affiliates have been providing consultancy services and participating in a specific industrial application called Turbine Inlet Air Cooling (TIAC) or TIC for maintain peak performance of the Gas Combustion Turbines. The Heavy-Duty industrial chiller plant relies on much larger thermal storage tanks, the availability of waste energy, and use of conventional centrifugal chiller plant but also absorption chillers and ammonia-driven screw chillers. Finally, ADC has been responding to industrial clients who have been requesting cooling for their processes. Such a system is characterized by having high level of redundancy and resilience in order to accommodate over 8,000 hours of operation in a year. 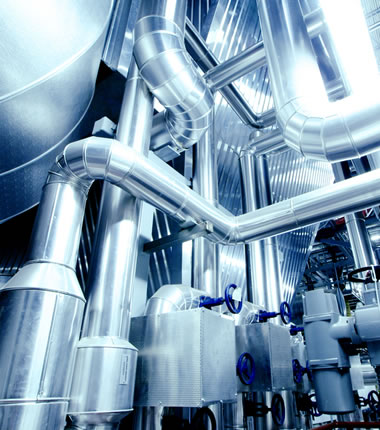 As a turnkey contractor in the fields of Cooling Plants, Energy Services, Grain Handling and Infrastructure, ADC continuously work on bringing our industrial application to good conclusion through continuous engagements.